“The history of energy use is a sequence of transitions to sources that are cheaper, cleaner and more flexible”

Since 2008, some 1,500 investors have committed to divest nearly $40 trillion¹ from fossil fuel companies; while 236 asset managers with $57.5 trillion are committing to a net zero target; and the Net Zero Banking Alliance now has more than 100 members. Even corporates such as Nestlé, Repsol, Qantas, ThyssenKrupp, BP, Ford Motor Company, American Airlines, CEMEX and Woolworths are all committed to the fourth energy transition².

But behind the accelerating momentum to achieve net zero emissions by 2050, there is an inconvenient truth: transitions take a long long time.  Like its predecessors, this transition is more complex that simply a shift from one energy source to another. The high correlation between GDP and energy use means that businesses, jobs, industries, economies and societies will all be impacted. And along the way, the risks will include  rising energy prices, energy supply volatility, and asset impairment.

Vaclav Smil, scientist and prolific author on energy transitions, has forced the world to face the inertia associated with the current shift from fossil fuels to renewables by holding up the numbers. Quite simply, despite producing more energy from renewables each year, the global energy mix is still 84% from oil, coal and gas with wind and solar just 3.3% together. And is anyone asking what is the carbon footprint of wind turbines or solar panels compared to fossil fuels?

McKinsey & Company’s recent report The net-zero transition: What it would cost, what it could bring?³ not only highlights that developing countries and those more reliant on fossil fuels are disproportionately exposed to these shifts, but that at the same time it suggests that there are significant prospects for growth. As the world navigates the politics and economics of the fourth energy transition, Smil’s answer is to keep natural gas as the primary energy supply5 and, in a sense, we agree.

In our article The Future’s White: Exploring the Hydrogen Spectrum we compare and contrast the different ‘colors’ of hydrogen—based on how they are extracted—to highlight that white natural hydrogen is the only ‘green’ hydrogen production process, or ‘pathway’, that can compete economically with non-renewable fossil fuel energy sources.

Not only that, white natural hydrogen generates practically no CO₂ emissions and is completely renewable, relying predominantly on super abundant naturally occurring reservoirs and without depending on large government subsidies or new infrastructure. For these reasons, white natural hydrogen has a real shot at being an ideal solution for developing countries. Furthermore, at a local level, white natural hydrogen can be used directly for fertilizers, so minimizing transport costs. And, as a bonus, there is up to 2% helium, a high economic value gas that primarily used for medical imaging and of which there is currently a global shortage, typically associated with white natural hydrogen production.

To verify our assertions about renewable white hydrogen’s potential as a low emissions and energy efficient opportunity, at the start of the year MJ Hudson completed White Hydrogen Carbon Footprint Assessment; an independent third-party review of the TEH production process. 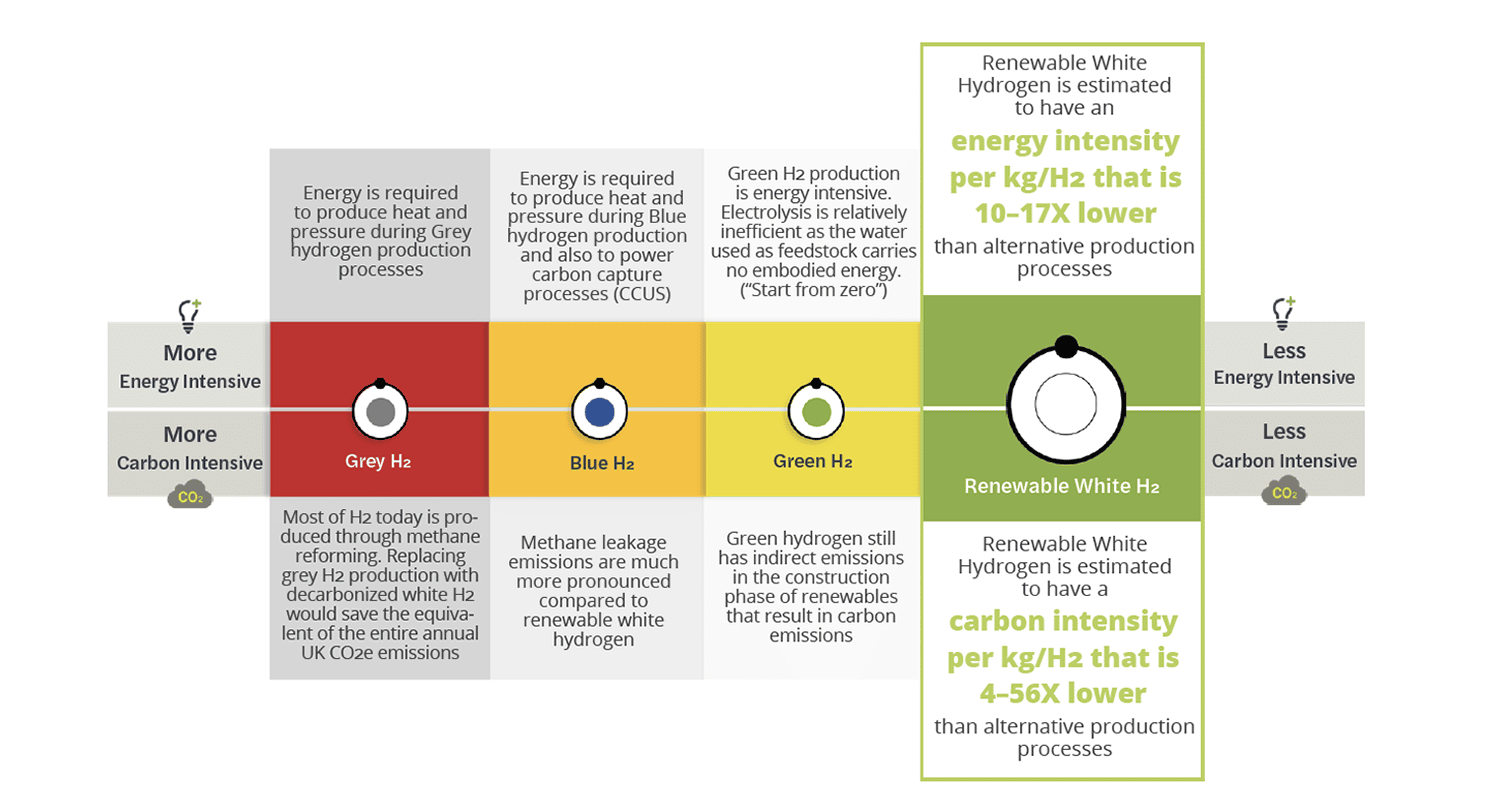 When compared to other methods of hydrogen production, MJ Hudson found that with emissions of approximately 0.24 to 0.35 Kg CO₂e/Kg H₂, renewable white hydrogen is at least four times less carbon intensive than green hydrogen, and 36 times cleaner than blue hydrogen.

The carbon footprint of renewable white hydrogen is dependent on well and production characteristics, as well as methane’s global warming potential (as referred to by GWP-20 or GWP-100). But even with worst case scenario assumptions made for methane leakage, gas purity, well production volumes and filtration efficiency, the carbon intensity of white natural hydrogen remains low at roughly 0.35 Kg CO₂e/Kg H₂, significantly lower than the next best alternative.

Furthermore, the net energy ratios show that, when compared to grey hydrogen (fugitive methane emissions are significant); blue hydrogen (energy is required for carbon capture); and green hydrogen (where albeit renewable energy is required for the electrolysis), white natural hydrogen is at least 36 times more carbon efficient. So by producing almost 11 times more energy than is consumed in the production process, white natural hydrogen is the only hydrogen production method which is an energy source rather than an energy carrier.

According to the International Energy Agency’s 2021 World Energy Outlook6, the role of hydrogen in a net-zero future is considerable. As 17 governments (including the European Union’s hydrogen strategy for a climate neutral Europe) have already published low carbon hydrogen strategies and more than 20 more are in the throes of developing them, clean hydrogen initiatives are likely to grow exponentially in the coming years.

Through capital market innovation and disruptive technologies, Beam Earth is committed to delivering energy transition solutions that do not impair energy supply or affect energy access. And our current focus is on renewable natural white hydrogen because we believe the energy future’s white.